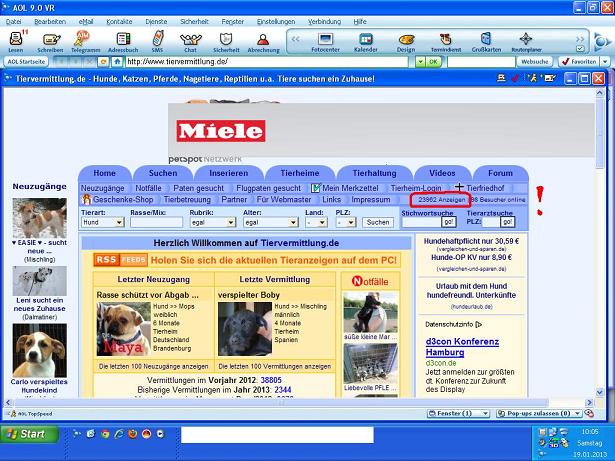 <<< Information: The translation of Aua878a is still in progress. Beneath DN-readers will find the letter as far as it is translated. >>>

However, behind Doggennetz.de stand not a wealthy newspaper with its own judicial department. Doggennetz.de is only an animal welfare critical internet blog, operated and legal represented from me, Karin Burger. By the way of this commitment Doggennetz.de is belong the professional foreign animal smugglers now one of the most hated website, which is responsible for risk in every conceivable way, persecuted and maligned.

Aside from the all too rare flowing „read money“ , very few animal friends  pay for the costly work of editorial Doggennetz.de, this editorial writes both free as in vain.

You describe in your mail that German animal welfare activists overflow the animal shelters in your country on purpose to pick up dogs, which will then, reportedly taken to Germany and take there in families. You doubt this statement. You suspect that the truth is quite different. Then you mention the name of the German Animal Protection Association, is the target of your criticism.

Please understand that Doggennetz.de will not mention the name of this organization here. This kind of „animal welfare activists“ have a lot of money and like to use this against critical reporting  journalists and send  immediately highly paid lawyers against the reporting journalists in the field. And there rich even small things: a critic writes in an article that the president was at the meeting sitting on a green chair, but later when you go to court and you can’t proof that the chair was green and not blue, collects such journalist its injunction. The example may seem exaggerated, but hits the core of the truth.

You further describe the results of your research on the whereabouts of Montenegrin dogs in Germany: They end up in animal shelters and nursing places, at E-Bay or other merchandise sales platforms. And then you never hear from them again.

Doggennetz.de can confirm your research result: That’s right! And not just at the club you mentioned, even in hundreds of foreign animal trafficking organizations that spend under the guise of animal welfare annually estimated 250,000 to 400,000 dogs to Germany.

We do not know where all these dogs going. Read what possibility options abroad dogs in Germany expect. You will find listed in Aua802.

You give your hopes our editors may check the organization you named and take appropriate consequences.

This hope must Doggennetz.de unfortunately destroy!

Cries for help like yours our editorial gets all few weeks from all countries of Europe and beyond. All of them want to know: What happens with the animals in Germany? Everyone wondered why the German animal welfare activists do not do their work transparent. All are wondering whether these imports to Germany are even legal. All are concerned that German animal welfare activists go exclusively with foreign animal friends on a collision course. All think about where are all the dogs are actually. And all suspect: This can’t be animal welfare!

And all these crying of help have right: This IS no animal protection!

Cursory check: Criteria of soundness are not fulfilled

Nevertheless, this editor has seen the organization you mentioned briefly on the Internet. Even the presentation on the website of the association shows: The most fundamental criteria of soundness are not met:

In short, the usual! The above result of an cursory proof of soundness is almost typical for dog-trafficking organizations.  The organization you mentioned  is currently offering a bitch with puppies on the pet-shop in the internet Tiervermittlung.de. If these puppies were not born in Germany, to which there is no evidence, that would be a proof of illegal imports.

But it makes no sense to turn off the small or large dog-trafficking-organization X. In its place come and take over his business immediately other! There are hundreds of so-called animal protection (registered) societies, which are concerned with pet-trafficking  (unlike: international animal welfare)! And they accumulate a fortune. A large registered society, which is active  for years with the dog-trafficking, currently has a fortune of 10 million euros!

Germany is not a paradise for dogs

The current situation for dogs in Germany:

German dog shelters are crowded, as well as the pet shops in the internet, where the dogs from alien countries are offered for sale by their „dog protectors“. One of these numerous places is Tiervermittlung.de. The latest number of advertisements in this place is almost 24.000!

The german society is extraordinary intolerant with dogs.

Our country is stuffed with people who are full of hostility against dogs and meanwhile they are well organized. One of the most disgusting places to find these people is Gegenhund.org. Dog haters spread poisoned baits everywhere in Germany, so that we even have a virtual service to keep people informed about these baits.

In every federal state in Germany there are so called Landeshundegesetze (which means valid laws in a federal state concerning dogs) which restrict the rights of dog owners. Dogs of particular breeds must be lead on the leash and wear a muzzle. Moreover also the owners of other breeds besides the particularly restricted ones must keep their dog on the leash in many public places.

Also in Germany dogs (and other animals) are brutally tortured and killed. According to animal protectors  there is an unknown high number of dogs (and other animals) that are sexually abused and tortured in a sodomistic way. German huntsman shoot about 65.000 dog a year in fields and forests. Another item of high priority is the increasing number of so called animal hoarders who let their numerous animals suffer.

So if people who use to smuggle dogs claim that Germany is a „paradise for dogs“ they lie.

Animal lovers in alien countries must act themselves!

Doggennetz.de cannot help you – just like the others who cry for help – sorry. You yourself must get initial. With pleasure we show you a couple of options to prevent the smuggle of dogs from your country to Germany under the camouflage of animal protection.

They must obey the laws and rules

First of all you should know that there are a number of national and European laws governing these animal imports. Animal protection societies are obliged to obey these laws and rules.

Montenegro has been no EU country, but a candidate. Montenegro is one of the so-called „non-listed third countries“ (here, page 9) in reference to the rules concerning animal health. For animals out of these countries there are more stringent import regulations. This is now not be discussed again in detail. Find the specifications about the key words: animal health law, EU law, EU directives commercial importation of animals.

You should know that the society you mentioned in your letter is obliged to report all pet imports to the German veterinary office. There is a reporting system. It’s called TRACES. Animal protections societies are not allowed to bringt bitches with puppies to Germany. Besides the usual medical record (EU-Passport, German called: „EU‑Heimtierausweis“) all animals imported from „non-listed third countries“ as Montenegro  have to show a certificate about the existing titer of rabies.

Ask the club that all shipments are properly notified about TRACES.

Report the imports of the Germans to the competent veterinary authority in your country.

Ask the competent veterinary in Montenergro  whether he sees and examanines all animals of each transport destined to Germany or other European countries. Every dog-trafficker is obliged to present all animals of a transport to the authorities in Montenegro (or other countries) directly before the transport starts. The veterinarian authorities in your country have to issue a certificate about the health of the transported animals and that they are in a good condition to stand through the long journey.

Ask about whether drivers who carry these shipments, have a certificate of competence.

Customize pictures of vehicles (fotos should show the car registration number), best in the loaded state. Try to find out transport data (departure date, departure city, number of transported animals, vehicles, signs, directions, border crossings, destination (s) in Germany). If you can send such specific data to Doggennetz.de we can inform the German authorities to arrange for transport controls.

By the way: This editor is always interested in fotos of German animal traffickers and their transports. Doggennetz.de will  publish those documents of trafficking!

If we succed to arrange  transport controlls German authorities nearly always detect different violations of laws, rules and directives. Frequently, animals must be seized by the authorities and sent to German animal shelters. Those persons who are responsible may get penalties and heavy fines! In many cases they were accused also in criminal aspect.

But this is the only way to stop pet-trafficking!

And do not worry for the case of confiscation of the dogs and cats: : Confiscated animals from  abroad enjoy greater security and better living conditions in German animal shelters as they do under the responsibility of most oft he protections societies.  Dog-Traffickers dont’t care about the animals when they are first of all in Germany. They often put them on uncontrolled, often not skilled fostering places or let them be adopted by amateurs.

The further translation of Aua878a is still in progress!

We ask for your patience!